UK, US, and Canadian English: Main Differences Explored for Those in Language Courses

Canadians, Americans, and the British all speak the same language. But when it comes to spelling and pronunciation, you’ll find some key differences in their English. As three separate countries with unique histories and cultures, it’s no surprise that their use of the English language varies.

Generally speaking, American English gets the most exposure through films, TV, and other popular media. Many people also find it difficult to distinguish between American English and Canadian English.

If you’re preparing to take English language courses, you may soon begin to notice the subtle differences between the versions of English. By exploring each of them, you can improve your knowledge of English as a whole and pick up on some of its cultural nuances. Below, learn more about the main differences between US, UK and Canadian English.

The accent is the most obvious difference between English spoken in the UK, US, and Canada. Generally, Canadian English is more closely related to American English, while British English has a more distinct accent. The British tend to pronounce each word clearly, emphasizing letters such as “t.” In American or Canadian English, “t” is often pronounced as a “d,” so words like “metal” and “medal” sound the same. However, when it comes to the “r” sound, the British tend to drop it, while the Americans and Canadians pronounce it. For example, the word “far” in British English sounds more like “fah.”

As you’ll discover in your language courses, there are also a few differences between American English and Canadian English. Generally, Canadians raise the “ou” vowel sound, so the words “out” and “about” sound closer to “oat” and “aboat.” This is where the famous Canadian stereotype “oot and aboot” comes from! 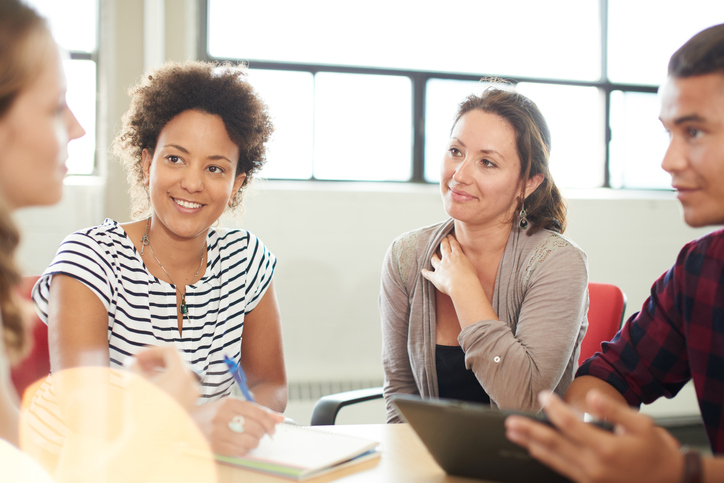 Listen for the differences between British, Canadian, and American English

Spelling is another key difference between these English dialects, especially when it comes to the use of “z/s” in a word, or “re/er” at the end of a word. As a rule, American English uses a “z” in words such as “realize” and “analyze.” Canadian English also follows that same rule. On the other hand, British English replaces the “z” with an “s,” so it spells “realise” and “analyse.”

At the same time, American English uses an “er” at the end of words like “center” and “theater.” In the UK, however, those words are spelled “centre” and “theatre,” with a “re” on the end. Here,

Canadian English is more similar to British English. This is partly due to the French influence in Canada, since those words are spelled the same way in French.

Improve your understanding of English spelling through language courses

Discover Key Vocabulary and Phrases in Your Language Courses

At our language school in Montreal, you’ll become familiar with some of the English phrases and idioms to use in everyday conversation in Canada. Of course, these are partly formed by the culture and customs of the country, and may differ from those in the UK and America.

For example, a “loonie” and a “toonie” are slang words that refer to one-dollar and two-dollar coins in Canada. In America, however, you might hear “buck” to refer to one dollar, while in UK English you might hear “quid.” When it comes to asking questions, Canadians often add the sound “eh” to turn a statement into a question. For example, a Canadian might say “Going out, eh?”

With knowledge of these differences under your belt, you can improve your understanding of the English language as you prepare for your training at POINT3 Language Center!

Are you interested in learning more through professional language training?